“City of Sin or City of Freedom?” Five years ago I visited the captivating city of Amsterdam for the first time. I travelled with my University during my second undergraduate year. It was actually my first trip outside of Europe and it surely was an eye-opening experience for a young girl from the relatively conservative Caribbean.

I had never experienced such an openness regarding taboo subjects such as sex and drugs. You can easily walk into a local corner shop or grocery store and buy sex or marijuana paraphernalia. Sex shops are abundant and the term coffee shop takes on a new meaning. In Amsterdam, coffee shops are a casual and safe place to relax with a blunt or enjoy a tasty weed dessert.  Depending on who you speak to Amsterdam is either a City of Sin or a City of Freedom.

Just last week, I visited Amsterdam once again and like the first time, I spent 48 hours in this amazing city. Unlike the first time where I travelled by coach, stayed in a hostel and partied until the early mornings with friends like a typical 21 year old, the second time around I did things a bit differently. A little older and a little less broke meant no need for communal sleeping arrangements or to  spend 8-10 hours on a bus.  This time around I flew to Amsterdam with my family and stayed in a lovely hotel. It was a completely different experience from the first time but a great one nonetheless.

Upon touchdown, the first interesting thing about Amsterdam that I noticed was that it probably has one of the longest runway taxi’s I have ever experienced, approximately 20 minutes to the terminal. Wow! Another 20 minutes was spent finding our way out of the airport and finally we were off to our hotel.  We stayed at the Jaz Hotel, a really cute and modern hotel situated near event venues such as the Ziggo Dome and the Amsterdam Arena. The hotel was very conveniently located with several restaurants and a metro nearby. We checked in and set off in search of food and to  explore the city centre which was about 15 minutes away via metro.

Having just recently visited Venice, Italy the first thing you notice is that the two cities are very similar. In fact, Amsterdam is often referred to as the “Venice of the North” with its numerous canals, bridges and Italian restaurants. Aside from Italian food, Steakhouses and Grilled food places are also plentiful. Having had our fill of Italian food for probably the rest of the year, we opted for a grilled meal that consisted of ribs and fries which ended up being my go to meal for the entire trip haha.

Our bellies filled, we continued our exploration of the cobbled streets of Amsterdam. This led us to Dam Square, a popular venue for street performances. We were not disappointed and arrived just as one street performer was starting his show. The show consisted of comedy and a magic act involving him getting out of a straight jacket, chains and his underwear! The street performer was clearly quite good at his job. He managed to get us and several dozen other individuals to stand in the blazing sun for 45 minutes janticipating his final act. Spolier alert: the underwear he “got out of” was a ladies lingerie set probably hidden within the straight jacket haha.

Nevertheless, I loved the lively atmosphere of Dam Square with all the performances, people and traffic that consisted of bikes, trams and vehicles. The rest of the day was spent wandering the streets of the city centre, trying not to get run over by the aforementioned modes of transport considering that the roads and the sidewalks are all the same cobbled stones. Very tricky!

A long day of travelling loads of walking, I was super excited to return to the hotel and relax. The fact that the bed was super comfy was also enticing. The rainfall shower in the bathroom was a dream to my sore muscles. Just what I needed to help me drift off to a pleasant sleep to awake rejuvenated for the next day!

My family and I had no definitive plans for how we wanted to spend our time in Amsterdam. There were only two particular preferences that were expressed within the group. One was to take a hop on, hop off tour as my cousin really enjoyed those. The other was to visit the Red Light District. Personally, I’m not big on tours. However, I do understand that they can be a great way to see a city in a short amount of time.

As for the Red Light District I was quite apprehensive. I visited the Red Light District five years earlier and had decided that I was never going to go back again. Walking through those streets and seeing dozens of women displayed behind glass walls for “sale of sex” was a very disturbing feeling. Particularly, for the feminist in me. I do understand however that many people simply view it as a tourist attraction and something to be experienced. Interestingly enough I noted that this time around there was a large number of empty windows which may be indicative of a decline in the industry.

We settled on a hop on, hop off bus tour and a visit to the Red Light Secrets Museum. This was a good compromise for me. It meant walking through the area but also being able to learn more about the women in the district. I was  intrigued to hear their stories and learn about life as a sex worker in the Red Light District. First up was the tour on which we saw many other popular attractions such as Anne Frank House and Rijksmuseum. One of the things I love most about European travel is the markets. Thus, our next stop was Waterlooplein to visit a flea market in the area. We wandered around, enjoying some fresh fruit juices and even found a few great items!

Next stop was the Red Light Secrets: Museum of Prostitution. The museum is actually a renovated brothel, with some of the rooms maintained for viewing. Upon entrance individuals can view a video outlining 24 hours in the life of a sex worker in the district, moving on to a viewing of a basic room, deluxe room and S&M room. The basic room allows you the opportunity to experience how it feels first hand to “sit in the window“. The tour is approximately 40 minutes, filled with lots of visual, audio and video information about the history of prostitution and life as a sex worker in the Red Light District. I found it quite interesting and would definitely recommend it especially for those we want to “Stay woke”. The rest of the day was spent getting lost along the canals and cobbled streets of Amsterdam.

Finally, we returned to our hotel after being treated to a hilarious vocal performance by a very colourful character on the metro. This lead to a singalong and one of my aunts being serenaded! A nightcap at the hotel bar and it was off to bed and back to reality the next morning.

A late flight the next morning meant the opportunity to sleep in! We enjoyed a late breakfast to some live jazz music before it was time to head to the airport. Definitely a great way to spend 48hrs! From the moment I stepped off the plane, I couldn’t help thinking, “I could see myself living here”.  That is of course, if I ever decide to leave my first love, the Caribbean :). For me, Amsterdam is a City of Freedom, a place to be yourself. A place that encourages living life by your own definitions. It is filled with extra-ordinary character, culture and history.

My days of travel for 2016 are not over yet! Stay tuned to the blog and my social media channels to find out where I’m off to next! 🙂 I hope you guys enjoyed my 48 hrs in Amsterdam. Let me know in the comments whether you think Amsterdam is a place of sin or freedom. 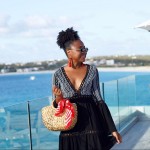